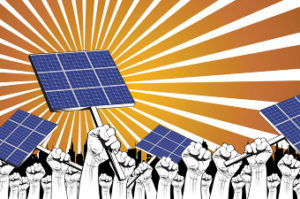 It’s a fact that solar power is on the rise in the United States and abroad.

Due to tax incentives, and lowered manufacturing costs, solar power is now becoming more prevalent in residential settings as well as commercial. The “solar investment tax credit” in the United States provides homeowners and businesses with a 30% tax credit for solar installations. This tax credit is slated to be in place through 2023. As a direct result of this credit, the solar industry has expanded 1600 times, which is 76% growth per year. This is a real result of over one million solar power installations across America. Due to this growth, the investment costs in solar have dropped 58%, which will continue to fuel this boom in solar power generation.

Solar power arrays have become commonplace in the American landscape. As a fire service, we are coming into more frequent contact with these installations during emergency situations. These arrays can be complex and fraught with hazards. With some understanding of the technology and implementation, our tactics and considerations can be adapted to operate safely in and around solar powered structures.

Technology
A solar system creates electricity by converting sunlight to electricity. Each solar panel is made of silicon wafers of photovoltaic cells. Each cell is a sandwich of silicon, which is a semiconductor. Each layer of the cell is charged oppositely from its neighbor by adding either phosphorous or boron (which are both potential hazmat materials). This doping of phosphorous or boron creates either a positive or negative charge on that layer of the cell. When photons of light strike the surfaces, this knocks electrons free between layers. Conductive strips at the edges of the layers collect these free electrons, thus creating electricity. Each set of panels is wired to its neighboring panels via conduits along the roof.

At a remote point of the circuit, there is an inverter that is used to convert the direct current (DC) generated by the panels to alternating current (AC) that can be used by the building’s electrical system. There may also be a bank of batteries on the premises for long-term storage of generated power and for usage during low-performance times (such as evening). The system may also, via the meter setup, be tied into the municipal power grid in order to sell back current to the power company.

Causes for concern
Solar panels pose myriad risks to firefighters during operations. When punctured, by ladders, tools, or an errant step, solar panels can deliver a deadly jolt of electricity to the crew members throughout the scene. Current can find a path to ground near an array, or at remote areas of the structure via any number of conducting conduits around the structure.

Electrical shocks can also be delivered via streams applied to the array during an emergency. The degree of the hazard is dependent on the voltage, water conductivity, distance and stream pattern. Pooled water or foam can also become energized by a damaged array.

Firefighting PPE is not equivalent to electrical PPE, and affords very limited protection against electrical current and even then, only in limited circumstances.

Punctured panels also represent an electrical fire hazard, as different portions of the array substrate may begin to arc, which often results in ignition and open flame. This can lead to fire between the array and the roof itself. If this fire penetrates the roofing material, this can turn into an attic or void-space fire and may spread quickly throughout the attic.

A puncture damaged solar array may create new and unexpected pathways for electricity to flow. These pathways can include array components such as frames, racks, and conduits, building components such as flashing, gutters, and metal roofs. A flame-damaged solar panel array can still produce lethal current, even after overhaul. Care should be taken during all phases of emergency operation. It should also be noted that outdoor-rated electrical enclosures are not rated to withstand penetration by hose streams and can collect water and represent another shock hazard.

Rooftop solar panels are required to have well-marked shut-off switches to prevent the flow of electricity if needed. This does not address the fact that solar panels are a passive technology and are producing electricity whenever they are in contact with a light source. Even in a disconnected state, solar panels can be charged by light and deliver deadly shocks. These systems are designed to provide up to 600 volts when the sun is shining directly on them. Additionally, solar panels can be energized by artificial scene lighting, or light from flames. While most systems contain a shut-off switch, there are no standards as to differing components of these systems and may lead to portions of the system still being energized even after being shut off.

When a fire fighting company disconnects electrical service at the meter of a home that is not always a guarantee of safety. This in effect isolates the structure from the municipal grid. Unfortunately any solar arrays on the roof may still be live and connected to the home’s circuits. It is common that there are multiple disconnect points for these types of systems. This can lead to confusion in an emergency situation and place many lives at risk.

Many departments issue devices to detect electricity in home circuits. These devices are designed to detect municipal AC. A solar array produces DC only before the inverter. As such, a detecting device will be an unreliable measure as to whether a circuit is safe or not.

A home outfitted with solar power may or may not have an accompanying backup battery bank to power the home during periods of low solar output. These battery banks can turn an emergency into a hazmat scene. They represent chemical hazards, explosion hazards, and also electrical hazards, and may continue to power the home even after electrical service has been disconnected. The battery banks may be outside, in a basement, or even in an attic. Without a pre plan it is anyone’s guess where they may be located.

An additional complication to solar arrays is solar shingles. These are in essence roofing shingles that produce electricity. They can be hard to spot in an emergency and can still produce deadly voltage. Additionally without the presence of a large solar array, crews may not have a heightened sense of awareness that there is solar power in use.

Solar panels can also introduce a tripping and slipping hazard to crews on the roof. Additionally, panels can slide off of the roof creating hazardous conditions to crews below the roofline.

Tactical effects of solar installations
A solar array changes the way we attack a fire. Rooftop solar installations can lead to faster collapse of roofs. This is due to added dead loads to the roof that are undesigned. Some departments will automatically switch to a defensive fire attack if a structure has a solar array on the roof.

Solar panels can also affect our ability to vertically ventilate a structure. This can lead to adverse or catastrophic fire conditions. One of the major benefits of ventilation is to make an environment more tenable and this possibility is removed if a company cannot operate on the roof.

Fire fighting operations can still be conducted on a roof that includes a solar array. Care must be taken to avoid disturbing panels with equipment and fire streams. Crews must be wary of trip hazards and must consider that a roof may collapse with little to no warning and adjust tactics accordingly, especially on a light-weight truss system roof that has been retrofitted with solar arrays.

Mitigating the risk
The safest way to mitigate risk from solar arrays is to keep your distance. Crews can work around the arrays being sure not to step on any conduits or panel surfaces. While not ideal, this can provide some protection if there is adequate space between panels.

The Solar Energy Industries Association has stated that many building codes are including provisions to build setbacks around solar installations that would provide firefighting personnel safe pathways to operate on the roof. Unfortunately building codes can be slow in adoption, and do not address existing structures. Most residential and commercial solar arrays make no provision for walkways. There are panels and conduits run at many points on a roof with little or no concern for firefighting logistics.

One tactic that crews can use with solar arrays is to ensure they cannot produce energy via light. After disconnecting the circuits, the panels themselves can be covered with salvage covers. This will ensure they cannot generate current. The safest covers to use are 4.0 mil black plastic, or green canvas. Historically it was recommended that Class A foam could be used to block sufficient light to reduce solar array output to nonlethal levels. However, testing by UL has changed this recommendation to be largely ineffective.

When working around solar arrays, crews must be in full PPE, including SCBA, as some of the materials used in the manufacture of solar arrays are known carcinogens and can include phosphorous, gallium, arsenide, and cadmium.

If applying water on or near an energized array, the electrocution hazard can be significantly reduced by using a fog pattern of 10 degrees or greater. A distance greater than 20 feet can reduce exposures to below 2 milli-amperes.

Conclusion
It is undeniable that solar power is here to stay. Not only in America, but worldwide. Solar panel can provide life-enriching power or a deadly embrace. It’s dangers are myriad and unpredictable when proper considerations are not made for operating on a solar powered fire ground. As firefighters, we do not have to immediately write-off a structure that includes solar. With proper preparation and knowledge we can still adapt and overcome. Care must be taken under, inside and on top of these structures. We must apply streams and tools judiciously, and move with intention and purpose to ensure the safety of ourselves and others on the scene. We can navigate the dangers in this new reality with a little knowledge, preparation and forethought.