Yesterday was the third shift of my current tour. It was also my 38th birthday. I’m usually pretty quiet about my birthday (being an introvert and all). However, my Captain, and one of the Rescue guys at my station discovered it was my birthday. Rescue Steve and Rescue Frank bought me a Chocolate Tres Leches cake (which was amazing and a very pleasant surprise! (Thanks Guys!))

My whole crew was off for the day. I was going to have one crew for the first 12 hours and a whole new crew for the second 12 hours. The day started off pretty busy and really didn’t let up.

At around dinner time we got a call for a Spice overdose. We went to the patient, and as soon as we cleared the call, we got a call for a “Dumpster Fire”. I looked to my senior and said “They said ‘Structure Fire’ right?!?!” and laughed and packed out.

As we pulled about a block away from the fire we could see the column of smoke. Apparently it’s brush and bulky pickup soon in our neighborhood, so there was about 100 square feet of yard waste, furniture and other odds and ends… on fire.

We got off the truck and pulled the booster line (a small, red line up on top of the truck that’s on a reel). We use it for dumpster fires, car fires, and other small nuisance fires.  There was a decent amount of on-lookers peeking out of every house around the scene.

We attacked from the up-wind side of the fire and began to put it out. I glanced down at a large square object that had a round object up against it that was putting off huge amounts of smoke and wondered “just what the heck is that thing?”

After about 3 minutes we had the fire out and were breaking up the pile to make sure we got any embers that were lingering (we call this overhaul). At this point I realize the weird square thing was a large rear-projection TV with an old tire leaning up against it. I chuckled to myself and thought it strange how I couldn’t recognize a couple of everyday items in the midst of a fire. Next to the pile of garbage was also a large green trash bin that had half-way melted into a giant green puddle. It seemed surreal to me at the time.

We got the fire under control and cleaned up the booster line, topped off our tank, and were on our way.

We ran a few more calls and got back to the station about seven. The crew that I had run with for the day all changed out with their relief staff and I had a whole new crew for the evening. We proceeded to run a few more calls.

At 10:45 we got another overdose call. This time it was in a different area. As we arrived on scene and greeted all of the police, I recognized the patient. He was the same guy from earlier, in a totally different area, even though he had gone to the hospital earlier in the day. I suppose some never learn, or choose to.

Just like before (except with a different crew), we handled this young man and got him off on his way to the hospital again. As soon as we cleared the call, we were dispatched on a full alarm to a “Mobile Home Fire”.

My partner and I packed out lightning fast! We were in another engine company’s area, but just happened to be close enough that we would probably be the first in engine.

As we pulled up on-scene, my Captain did a size-up (figuring out what we have, developing a plan, and reporting to other units). 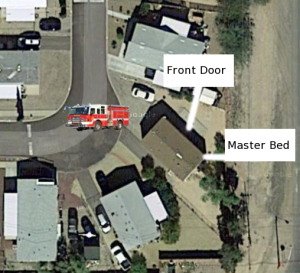 The fire was in (what appeared to be) the master bedroom at the back of the house, just past the front door. I had a straight shot to the bedroom with no obstructions. The Captain ordered me to select a line and make entry. My senior asked which line I thought we should pull. I said the 150′ transverse, and he agreed. I handed him the irons (axe and halligan) and pulled down the nozzle.

My senior firefighter ran towards the house and I followed behind with the transverse line. We approached the master bedroom from the outside and I could see that the window was partially smashed out (perhaps by the fire). The fire had 6-8 foot flames and was basically next to the window and was on a mattress and dresser. My partner said I’ll force the door while you reset. By reset, he meant “exterior reset” where we basically flow water on the fire from the outside to knock down the bulk of the flames quickly before making entry.

As my partner went to work on entry, I began to bank a straight stream off of the ceiling through broken window. Immediately the flames began to die down, and the smoke and steam began to bank down. After about 10-15 seconds, my partner got the door and I shut down my stream and ran up the front steps to follow him in.

As we made entry, the smoke and steam had banked down pretty low to the floor and visibility was zero, but the heat was bearable. I crouched down and followed forward and left to the master bedroom. I felt my way along, and as I entered the master bedroom I saw the glow off to the left, and opened up my stream. I wiped my mask as the flames died down and visibility had improved.

I was surprised by how flimsy the construction was. As I aimed my stream at the walls, they just peeled away like kleenex, exposing all of the construction beneath. As the flames were all knocked down, my partner grabbed the mattress and heaved it out the window to contain and embers, and followed that quickly with the dresser.

The floor of the room began to fill up with water, and my partner took his axe and swung once into the floor and opened it up to drain out the water. I was surprised by how easily he got through it.

At this point, other crews were setting up exhaust fans and searching the rest of the house for any victims of the fire.

As I turned to leave the house, I ran into two members from my academy.

We were cleaning up hose and resetting our equipment and I mentioned to another crew member that it was my birthday and he said “oh that’s one heck of a birthday candle!” The other crews cleared out soon afterwards.

The investigation took quite a bit of time, and we waited around until it was complete. We went in with our booster line, and a rubbish hook. The Captain put a few holes in the ceiling and walls. We flowed enough water to ensure there would be no re-kindle.

We got back to the station about 2 a.m. and reloaded the hose. I knew there was no way I was sleeping this evening. I was right. I’d had my first real fire and was incredibly pumped. (Of course the other calls we ran after didn’t help) The day I had been training for for so long had finally come. I wasn’t nervous or unsure at any point during the fire. I believe this was due to the great training of our academy!

Happy Birthday to me. I got to do some good!

I love this job and this department!