Our second foray into live fire was to be the “Flashover Simulator”.

A flashover is “the near-simultaneous ignition of most of the directly exposed combustible material in an enclosed area.” In plain English, when a room gets so hot that suddenly everything is on fire. This condition is not survivable for long, so we spend quite a bit of time learning contributing factors and signs of an impending flashover. 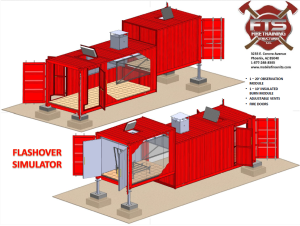 Note: I’m not sure if the is the exact brand of simulator we used or not, but it looks very similar. This is not an endorsement of FTS, although it looks very nice. 😉

Part of this training is the flashover simulator. The simulator consists of a pair of Conex boxes welded together. One is raised up slightly, and shortened. This smaller unit is the stage. It is lined with Oriented Strand Boards on all surfaces, and has a barrel full of wood near the middle.  Once the barrel is lit on fire, the rear doors are closed, and spectators arrange themselves in the lower conex box.

Once the whole room is full of smoke, they open the doors to feed the fire with oxygen, and the fire roars back to life, rolling through the smoke and crawling along the ceiling. As time goes on, the flames come within inches of the spectators, consuming all of the smoke in the room. At this point, one of the spectators knocks the flame back a bit with water (by using a tight stream in short bursts above the seat of the flame).

The spectators rotate, and they repeat the procedure over the course of 15 minutes or so.

The heat in this instance was much more intense than the burn room (I believe it was over 500 degrees Fahrenheit). As I was huddled in the bottom of the conex (with an additional turnout coat over me for added heat resistance), the smoke descended and within short order, we could barely see anything. I could hear the instructor (about 5 feet away initially) say “It’s right over us” but all I could see was gray and black. I was amazed at how totally blacked out the room was. Then I began to see small flickers of orange above me and I could feel the heat. I was sure that the flames were right on top of me, and sure enough, not a second later, a brilliant flame blossomed right above me. The sight of it was mesmerizing. They way that the flame almost lazily licked its way across the roof towards me was so captivating and beautiful that it’s impossible to describe.

As I rotated towards the stage, I had a much better view of the fire crawling up the walls and across the ceiling, reaching its way through the banks of smoke towards us. It almost seemed to come alive! It was incredible.

The Captain mentioned during orientation that what we were going to see was something that most people never get to see, and if they happen to, it’s often the last thing they see. I kept thinking of this as I watched the flames. In one moment it was like some sort of beast tearing around looking for something to devour, and the next it was a beautiful bloom taking shape inches from my face. It was hypnotizing to watch, and scary in its pure fury.

My two turns through the flashover prop were collectively the most exhilarating 30 or so minutes of my life.

The following video will give you a very good idea of what it was like, but as I’m sure you  can imagine, it does not do the experience justice in any way.

As we rotated teams in and out of the prop, I had a chance to be on the rehab team, which involved cleaning out the stage and prepping it for the next burn.

This was exhausting work! It seemed pretty straightforward: “Shovel out the debris, and re-load the OSB”. However, this was still a dangerous environment, as not only was it still super heated, there were still many dangerous gasses hanging out.

So I went on air and climbed the stairs up to the stage. I spent about 10 minutes with a couple of other students and an instructor cleaning it out. I really didn’t feel much heat at the time, but once I was done, I was completely wrung out and my hands were very hot. The instructor had asked me during shoveling if I was hot, and I said “no”, as I didn’t feel it. Afterwards though, I felt it.

I had to go onto the safety team the next go around, which consisted of having lines at the ready just in case. I was so hot, I had to have someone fill in for me so I could get some extra water. Lesson here is to be very careful about your body heat!! If someone else asks if you’re hot, assuming they’re asking because you look it 😉 (not sexy, but heat exhausted of course!)

Not all academies or programs have this type of simulator. If you’re looking at what program to consider, please consider the Pima Public Safety & Emergency Services Institute! You will not regret it. (and no, they’re not paying me to say that). Aside from the fascination aspect, this is an invaluable training tool.