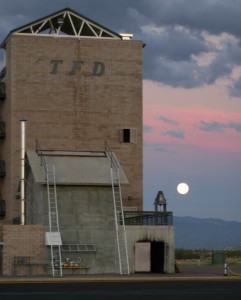 Last night was my first night of fire academy.

The training instructor is Captain Jeff Backherms from Tucson Fire. Everyone I’ve ever talked to about this program confidently states that he is an incredible instructor and that he’s built a top-notch program at Pima. Apparently the numbers back up those claims. The Pima institute has a great track record for certification and produces top-notch recruits.

The safety institute is a shared training ground. It’s shared between fire classes and law enforcement classes. From on-the-job to community college. It’s fairly remote and seems like a great facility.

I drove out to the grounds about 75 minutes before class was to begin. I expected a 30-40 minute drive with no traffic, so I wanted to give myself some wiggle room. I arrived with a little over 30 minutes to spare. I had snuck a peek at last semester’s syllabus, and had googled up (credit to my lovely Mrs for “googling up”) some maps of the facility so I knew where to go.

I was the fourth or fifth to arrive, and a few of us greeted each other, but we largely sat in a nervous silence. As time went on more and more students trickled in. By the time class began, we had 29 of the 32 or so I expected from orientation. I think one recruit was sick though.

The Captain began the class and gave a brief overview of himself. He seems like a nice and fair man. Like he said though, this is serious business, and it was very obvious that he takes this very seriously and wouldn’t suffer any fools. Noted 🙂

This is a Monday/Wednesday evening class, and the class is split in half for a weekend day. I landed in the Saturday group. For the next couple of Saturdays the entire class will meet, and then we’ll begin splitting up later next month.

This Saturday we are going to be doing a fitness assessment. This is what I’ve been dreading and working for. I’ve been training for months (9 or so) in preparation for this academy. I’m no Adonis, but I can run 5 miles at a 10:00 pace and not die. It’s a start. The idea with the assessment is to track our progress. We’ll do another assessment at the end of the semester. Fair enough. After that I believe we are going to spend the rest of the day in our turn-outs and sweating. Sounds like a good time to me!

The Captain says that TFD is going to be losing about 55 people and will be doing possibly 3 rounds of hiring between now and next January. Doing some napkin math, that ups my chances of getting on with TFD to about 6%. Astronomically better odds if you ask me.

We left the classroom and went over to The Tower. The Tower is a 6-story building that’s used primarily for stair-training, punishment, and various scenarios. 🙂 (see photo above). At the top is a bust of a firefighter called “Captain Mac” and you have to rub his helmet as you pass by (for good luck you know) and at the bottom of the outside stairs is a plaque that reads “100% effort 100% of the time”. Those of you that know me well know that this is how I do… well, everything.

We went over to the “Apparatus Bay” (where they keep gear and engines) and were assigned our PPE (Personal Protective Equipment) aka Turn-Outs aka Bunker gear. This was pretty exciting even though it was clumsy and awkward for all of us. To me it felt a lot like playing dress up, because I’m no fire fighter …. yet. We then learned how to put them on, and take them off, and put them on, and take them off, and put them on for time. It was beginning to feel like a crossfit workout 🙂 Our goal was to don our gear in 1:00. I made 1:06 but had a lot of difficulty with my jeans. I’m going to be practicing every opportunity I get, and wont be wearing jeans from here on out anyway. The lady next to me, Nadi (sp?), was incredibly fast. I was really impressed. Anyhow, I digress…

We then toured through all of the various “evolutions” (different fire scenarios).

It was very exciting to see all of the different evolutions and the tower. As I said earlier, I’m a bit apprehensive about the PT. I’ve been training for months, so just maybe I’ll survive it. On the plus side, I get to learn some Jodies (and yes, I just learned that word) 🙂

This is going to be an exciting semester. There is no plan B.