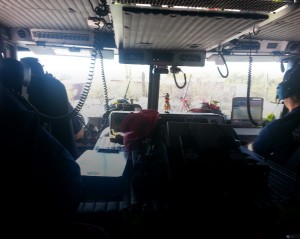 As I was discussing the life with my friend The Captain. He says to me “You should come on a ride along! The only way to know for sure if this is something you’re interested in is to try it for a day.” After looking at the web site for his department I thought they did not allow ride-alongs, so I mentioned that to him. He says “No way, we do it all the time!!!” My mind reeled at the possibility. Captain says “yeah, I’ll send you the link for the paperwork and we’ll get it set up for a couple weeks from now”.

True to his word, Captain sent me the paperwork the following day. I filled out all of the forms and submitted them. I reviewed all of the guidelines, which included a dress code. I went out and bought some clothes that fit the dress code and waited to hear back from Captain. He emailed me the next day and gave me the date which was 10 days out from when we had sat down to dinner.

The date that had been set was January 27th 2014. Captain told me to arrive at 8. I originally thought that it was for a 12-hour ride-along (as it said in the paperwork). Captain says “make sure and bring a pillow and stuff if you’re staying the full 24.” I replied “it sounds like you’re offering me to stay longer than the 12 it states on the form” and he confirmed for me that I could stay for a full shift. I was pretty excited about the prospect of getting the complete experience. It was kind of like a big boy sleepover…. with a fire truck too. I may have giggled a little over the prospect. (I know, right?)

A buddy of mine advised me that I should bring donuts in when I showed up for shift, so on my way to the house I stopped by and grabbed some donuts…

I rang the bell when I got to the house and waited….. and waited….. eventually a guy in an attached building happened to be walking by and said “oh I’ll let them know you’re here.” I guess they were out in the bay and did not hear the bell. Eventually Captain came out and greeted me. Most of the crew was still arriving for shift when I came in. I was greeted warmly and was forgiven for gaping at the people that I admired so much. As I was told to expect, the donuts were well received.

Captain introduced me to everyone and told me what they all did (rescue, paramedic, engineer etc). He showed me around the day room, the kitchen, their quarters, and the bay. The team got together for a quick meeting and ran down a few business items, and then went about their daily activities. Each person had a list of maintenance and pre-flight type items to do like cleaning equipment, and checking the trucks over.

I was invited to walk around and talk to each crew member as they worked. Each person was incredibly gracious and welcoming. They suffered my myriad questions with ease and grace and encouraged me in my pursuits and gave me lots of good advice. I spent some time with a fireman, an engineer, and a paramedic. They showed me the heavy equipment on the trucks, medical equipment, and gave me a tour of the ambulance. Did I mention how gracious they were?

This turned out to be a fairly slow day. In total, we only went on four runs. The first was for a motor vehicle accident….

We were sitting in the day room chatting around the table: talking about life and just shooting the breeze when the tones came on the overhead. “Engine 30, MVA….” and everyone sprang into action! Captain instructed me “just stay by my side and do what I say, you’ll be fine”. We roared out of the garage in what seemed like 5 seconds since the tones went off. I grabbed a headset and the guys began talking over the call we had and the location we were heading to. Lights and sirens blaring, we rocketed through traffic towards our destination. The cars ahead parted like the red sea. As exciting as it was, while we went along I found myself praying for the people we were going to help.

When we arrived on-scene, the engineer staged the truck to protect all of the crew from traffic, and the Captain controlled traffic until a sheriff showed up. The accident had left one injured woman and one dazed man. The crew were incredibly professional, efficient, gentle, and caring for this woman. They ended up stabilizing her on a board and taking her away in an ambulance, but the calm professionalism of the crew really helped to control the situation. They also attended to the other gentleman. He appeared shaken but refused care. Eventually he would change his mind and take an ambulance ride as well.

Our next call was for a gentleman at a clinic that had a sudden loss of blood pressure. Again the crew was incredible. They took the man’s vitals while conversing with him and letting him know what was going on and reassuring he was going to get the best care they could provide. The paramedic on the truck was really good with him, and in the end, he ended up taking a ride in the ambulance. As we were on our way out I got stopped by a rather rude nurse who was questioning who I was, as I was out of uniform essentially. She was just doing her job, so I can’t be too irritated, eh? Captain says “he’s with us.” That felt awesome.

Our next call was for a “code” at a clinical facility. When we arrived on scene there was a nurse trying to revive the patient. The crew went in and gently laid the patient on the floor and began CPR on her. To me it seemed obvious at a glance that this patient had passed away. The crew was incredible. They went into high gear and did their very best to save her. CPR for an extended amount of time is an exhausting exercise, and each man on the crew took turns trying to revive her for what seemed like an eternity. There was no hesitation from any of them. They immediately poured out 100% of their effort for this patient. At this point, though I could hardly believe it, my admiration for them grew even further. These were the type of people I wanted to be. They each poured themselves out for this patient, and the patient’s family, whom they would never even meet. In the end, the patient did not make it, but that never caused the crew’s determination to waver one bit. It dawned on me that these men performed this way on every call they went on. Every day. No matter what.

Until this moment this call was my biggest fear: would I be able to handle a death? My mind went into the composure I mentioned here. I know that there will be difficult calls. I can only pray that when they come I will conduct myself with the same professionalism, dedication, grace, sincerity, and sheer grit this crew does.

Our final call for the evening was for a malfunctioning alarm at an apartment complex. When we arrive at the scene, Captain hops out and goes to talk to the manager. Apparently there is also some dude creeping around in the dark and had made some threats. I wasn’t too sure what was going on there, as we were in the truck, and hey, it’s noisy! In the end, we hung out until the Sheriff arrived, and went back to the house.

At the end of the evening we got to sweep and mop the whole house. I really enjoyed mopping. It was mindless, but it was good work, and I was happy to do it. After that we washed down the truck and ambulance. Again, mindless, but great work. I felt proud that I got to partake in the work. I felt like even in a tiny way, I got to contribute at that moment.

I slept like a baby that night, as we had no further calls. In the morning I had to scoot pretty quickly, as I had to get back across down because I had a desk to fly that day. I thanked everyone profusely and went along.

As I was leaving the house, I felt like I could divide my life by that day: before and after. I told myself I was being overly dramatic, but it was true. That day was incredibly galvanizing. I’m so grateful to the crew of The Grove. They’ve helped me to change my life. I’ve told Captain thanks about 20 times, but I don’t want to seem like a total pain and gush all over the guy, but I’m so grateful, and really admire him and his crew. Did I say how much I admired them and what they do?

4 thoughts on “A Date Which Will Live In Infamy”